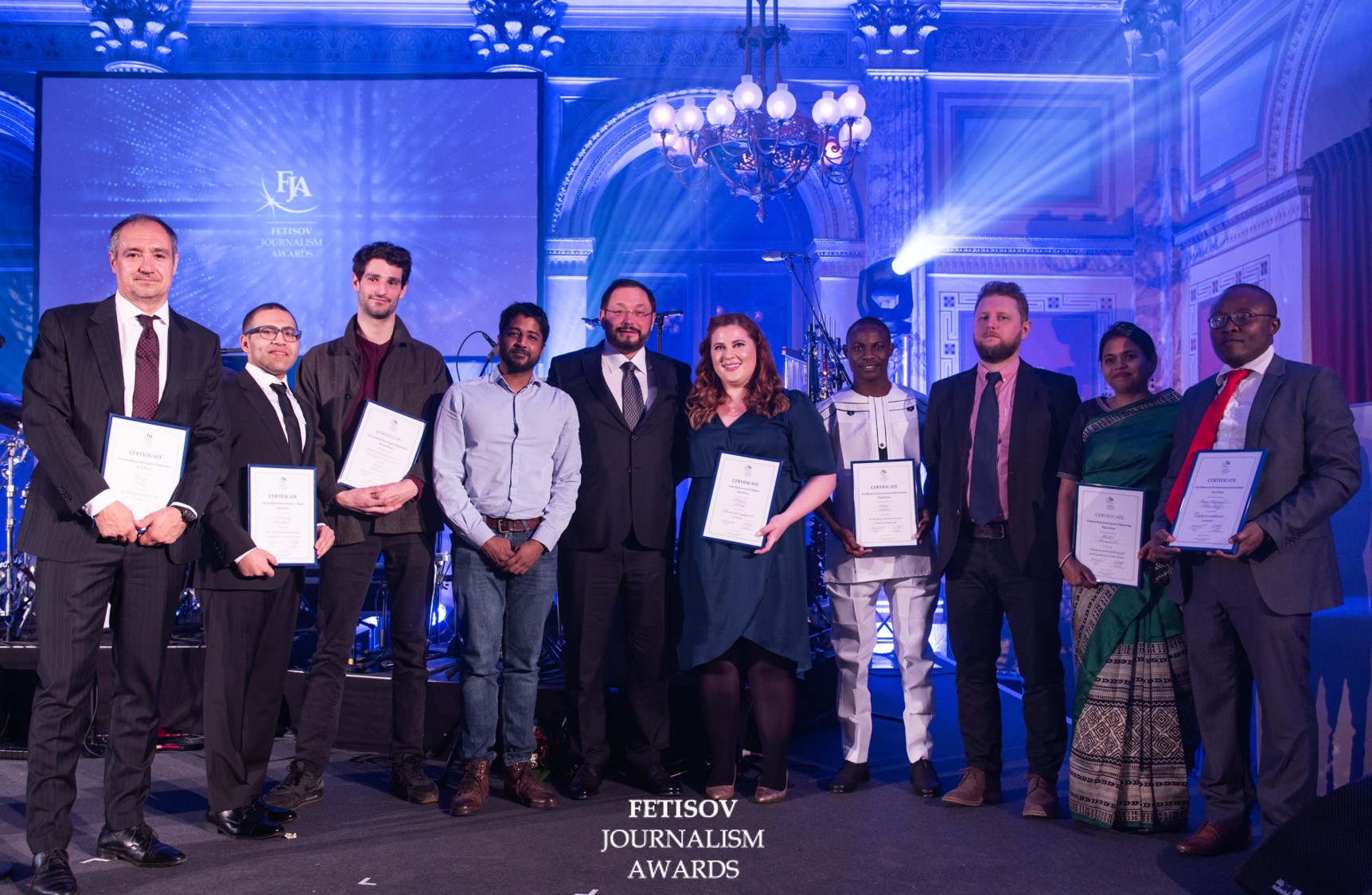 On January 22, 2020 the Fetisov Journalism Awards ceremony was held in Lucerne, Switzerland. The event was attended by the leading experts in the field of journalism, finalists of the competition, prominent public figures and the founders of the award – the Fetisov family.

The organizers of the competition set a goal to involve representatives of as many countries as possible regardless of their location, economic and political background.

The mission of the competition is to unite journalists from all over the world into a community of like-minded people who are ready to take investigative journalism to a fundamentally new level.

The Fetisov Journalism Awards were presented for the following categories:

Articles published in print media and posted on media websites were submitted for the competition. The organizers of the competition received over 160 entries from journalists from more than 50 countries.

The shortlisted group was further evaluated in a juried process, that resulted in the final selection.  The members of the Fetisov Journalism Award Jury are:

Vice-president of the Italian Delegation at PACE

Based on the extensive review of the Jury, the following awards were presented:

The journalist Diego Cabot (Argentina) for the article “The Notebooks of Corruption” was considered the best work in the category.  Second place went to the team of authors Mathias Destal, Geoffrey Livolsi, Lorenzo Tugnoli, Michel Despratx (France) for the article “Made in France.” The third place was deservedly given to the journalist Roli Shrivastava (India) for the article “Missing wombs: the health scandal enslaving families in rural India”.

First place was awarded to the Isaac Anyaogu, Nigeria and Petra Sorge (Germany) for the series “Dying in Instalments”. Second place was awarded to Philip Jacobson (USA) and Tom Johnson (UK) for the article “The Secret Deal to Destroy Paradise.”  The third prize was awarded to Amos Abba (Nigeria) for “How Nestle Nigeria Contaminates Water Supply of its Host Community in Abuja”.

In the category “Contribution to Civil Rights” the only prize was awarded to Katie May (Canada) for the article “Remote Life, Rough Justice”. According to the calculation algorithm, none of the works in this category scored enough points to be awarded first and second places.

In the category “Outstanding Contribution to Peace” the first-place winning entry was an article by Mohamed Abo-elgheit (Egypt) “The End User: How Did Western Weapons End up in the Hands of ISIS and AQAP in Yemen”.

The award ceremony was held in the legendary Schweizerhof Palace and Hotel. The host of the evening was Swiss actor Philippe Reinhardt. Swiss politician and scientist Martin Bäumle greeted the guests with the following words:

“We are pleased to welcome the best and the leading experts in the field of journalism in Switzerland. The Fetisov Journalism Awards is no doubt one of the most outstanding events in the recent years. We are all present at a historic moment. As a politician I give a lot of attention to environmental issues and I am glad there is a separate category of the awards for journalists who raise environmental questions and conduct investigations. Together we will make a difference! Good luck!”

The founder of the Fetisov Journalism Awards, Gleb Fetisov also made a welcoming speech.

“The world is at a crossroads. The goals are vague and meanings are lost. Moral values have been thrown on the garbage heap of history. There is a clear separation between the “golden billion” and the rest of the world. The sense of justice is lost somewhere in the gap between the two polarities. The Global Bureaucracy has violated the principles of the Universal Declaration of Human Rights and now it triumphs. Politicians, military men along with irresponsible transnational corporations wreak havoc, rattle their guns and destroy the environment promote social disadvantage, war, discrimination and inequality that serve as a building blocks for power abuse and capital increase. Destructive greediness and egoism of the ruling elite threaten to undermine the very foundations of life.

Who will defend us? There is only one estate left – the Fourth Estate – that is still legitimate. This is what we call honest journalism. It is now suffering heavy losses. The list of journalist martyrs grows longer every day. Journalism as a social phenomenon is being squeezed out of public consciousness. Its credibility is undermined by aggressive attacks by politicians, by fake news and by pseudo-journalistic tools.

The Fetisov Journalism Awards have been established with the purpose of strengthening the base of genuine journalism. The project is aimed at recognizing outstanding achievements in the field of journalism. Its goal is support journalists in their mission of promoting human values and reporting on sensitive issues of modern realities.

The Fetisov Journalism Award intends to help the global journalism community take the actions that are not taken by the politicians.  That means dispelling mistrust, bringing to a halt aggression and enmity and disseminating true stories about a diverse, controversial and fascinating world we live in. Journalists provide real knowledge and find moral strength to stand on the side of good.

The competition comprises four very important categories. By covering significant topics journalists make their contribution to solving the most challenging tasks of modern times reflected in these four categories:

An unprecedented financial prize is intended to unite journalists around the world who are willing to raise journalism to an entirely new level and meet the demands of the modern day reality.

Support for such integration is the primary mission of our initiative”.

Secretary General of the European Federation of Journalists Ricardo Gutierrez gave a speech.

“It is a real pleasure and an honor for me to attend this award ceremony. I really feel grateful.

As General Secretary of the European Federation of Journalists, I am used to deal with grim and sad issues: killed journalists, journalist facing harassment, fired journalists, journalists under pressure from politicians, businessmen, public officials, the police, the judiciary, organized crime…  And sometimes from citizens, blaming us for sharing so-called “fake news”, for not doing the job in a proper way.

I am always impressed by journalists’ ability to resist those threats.

I believe in the power of journalism. But journalism nowadays is at risk.

Europe is not the worst place for journalists worldwide. Bur let me raise some facts: in the last 5 years in Europe, we registered 26 killings of journalists. 26!

We have right now in Europe over 120 journalists and editors in prison. In Turkey, in Azerbaijan, in Russia, in the United Kingdom (Julian Assange is facing arbitrary detention and psychological torture in the UK since April 2019).

Every single day journalists are detained for dubious reasons. Yesterday, Phil Jacobson, award-winning editor for the science news outlet Mongabay, who was supposed to attend this ceremony, has been arrested in Indonesia. Arrested for an alleged visa violation. A shameful arbitrary detention for administrative reasons!

As journalists, we need support. More than ever before. And that’s why I am so grateful, ladies and gentlemen.”

This award is not just about rewarding outstanding journalists with major monetary awards. It is much more than that.

The real achievement is to promote professional journalism, ethical and committed journalism, as a way to transform the world in a better world, as a way to improve citizens’ conditions, as a way to allow them to acсess reliable information, as a way to strengthen the role of journalists in protecting democracy and the rule of law.

The prize winners were awarded the largest prize in the history of journalism (1st place – CHF 100,000, 2nd place – CHF 20,000, third place – CHF 10,000), as well as diplomas and commemorative gifts. The money prize awarded to the winners is unparalleled in its size in history.

The award ceremony ended with a festive dinner and a concert by 10 time Grammy Award winner and one of the greatest jazz players of our time, Arturo Sandoval.

The Fetisov Journalism Awards will be held annually. 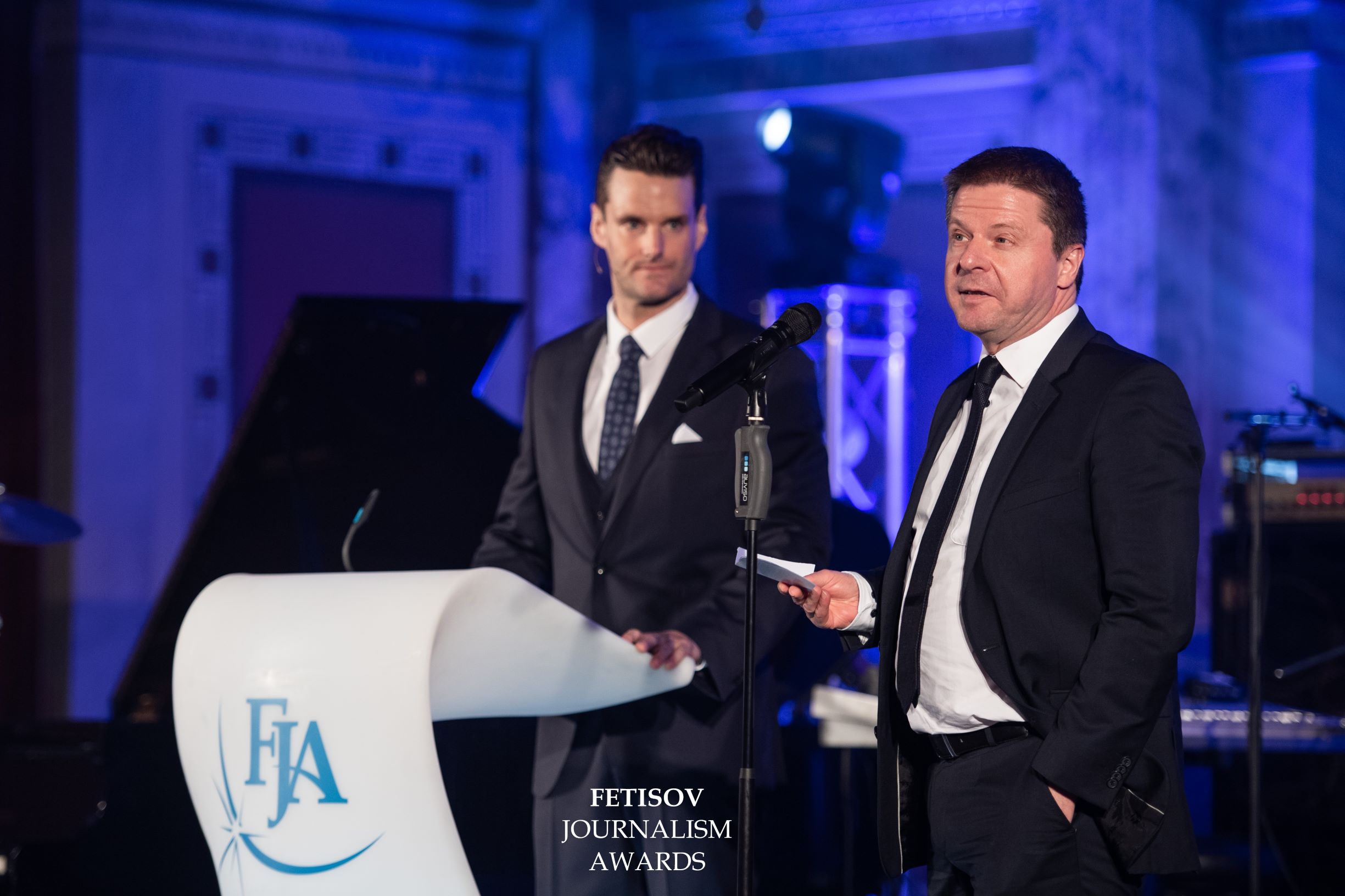 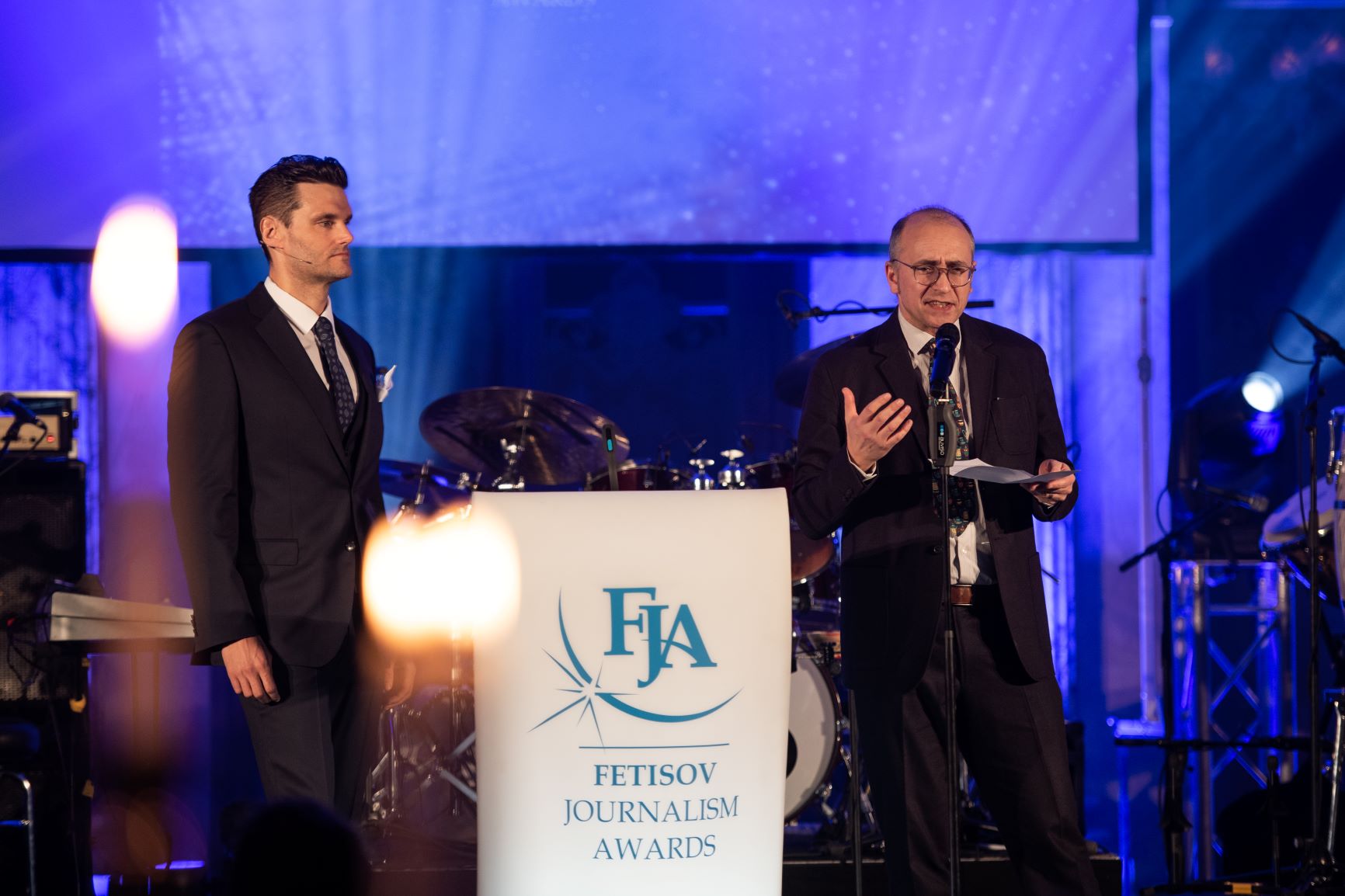 Ricardo Gutiérrez, General Secretary of the European Federation of Journalists 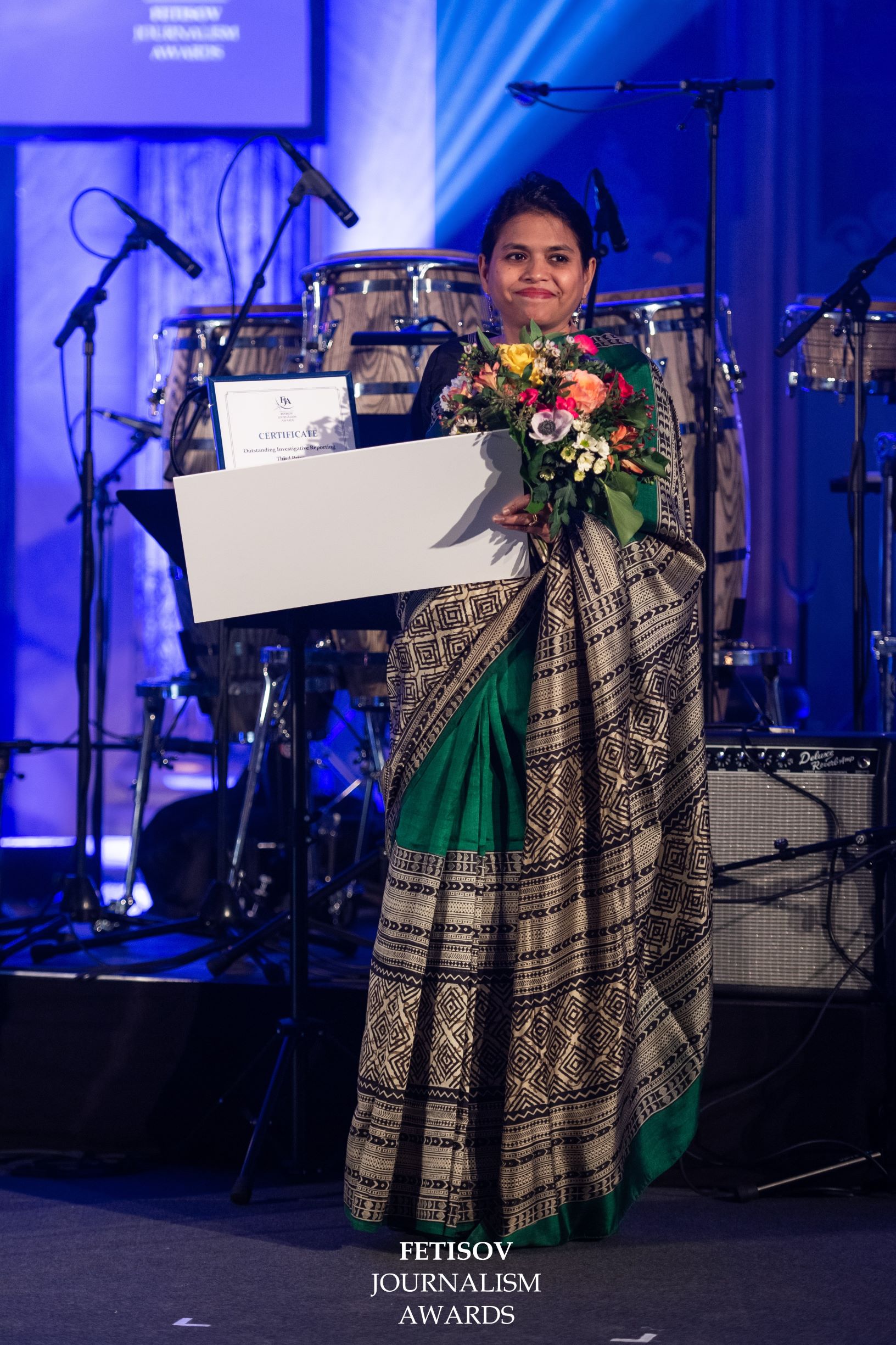 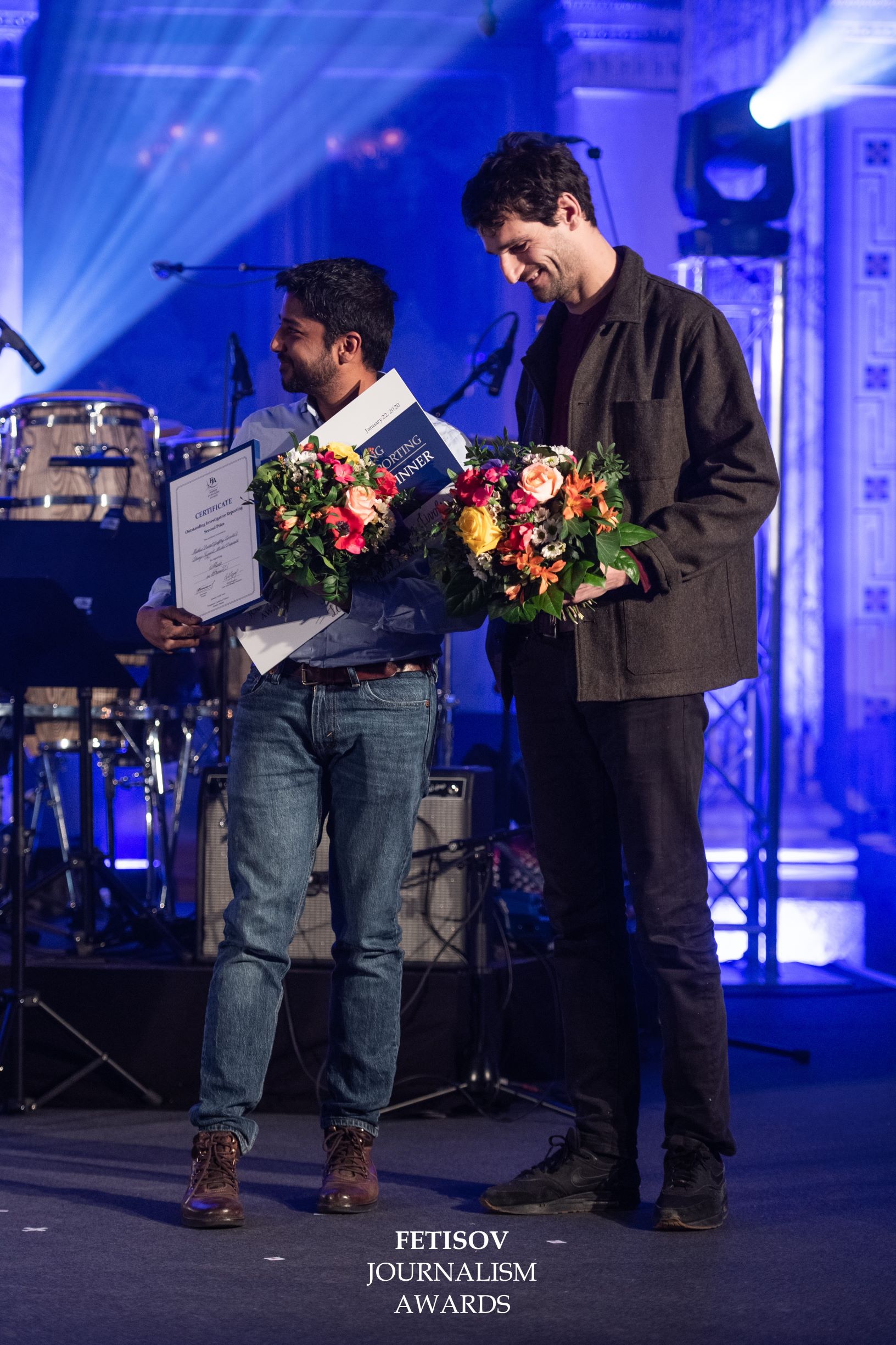 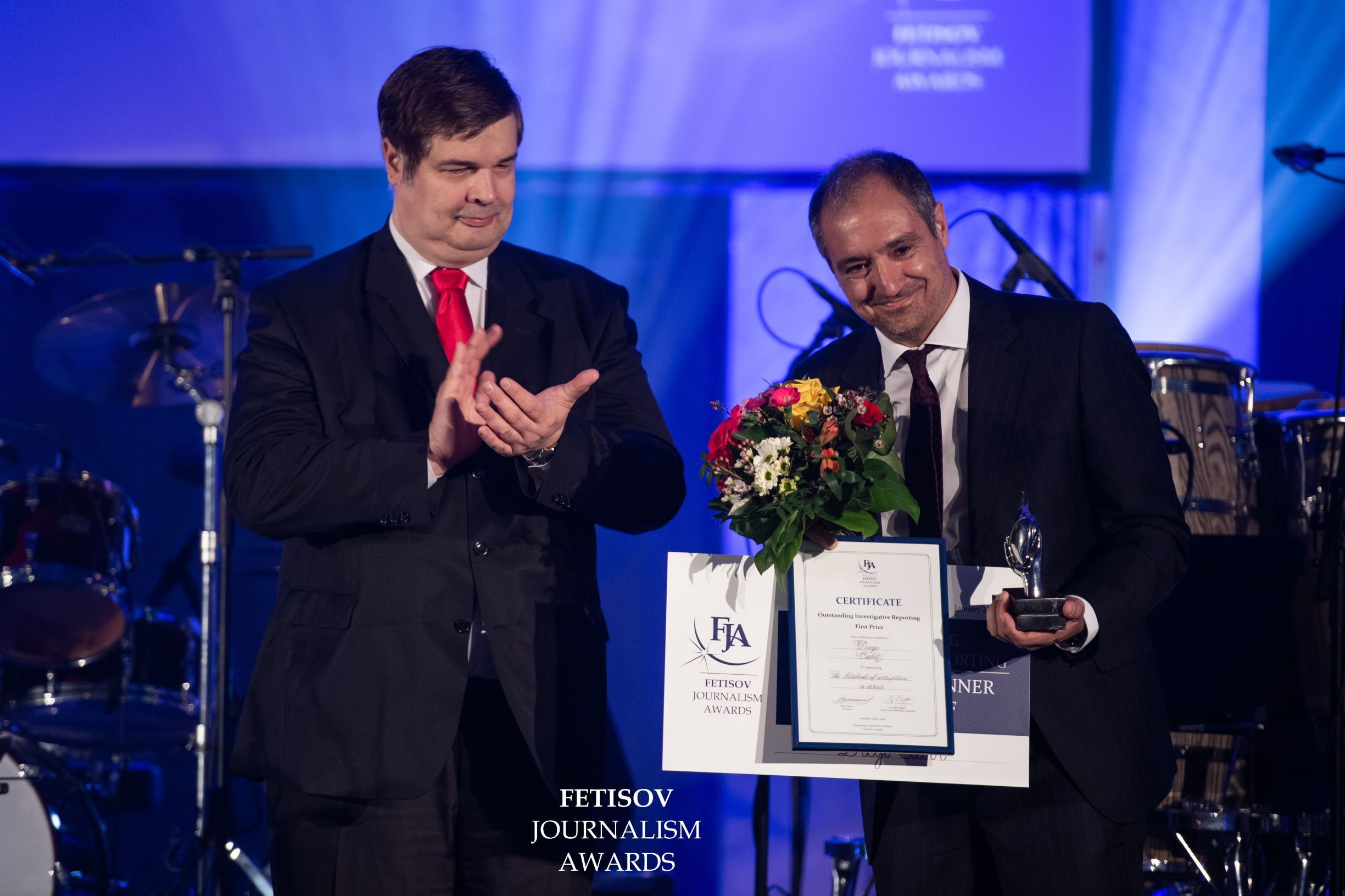 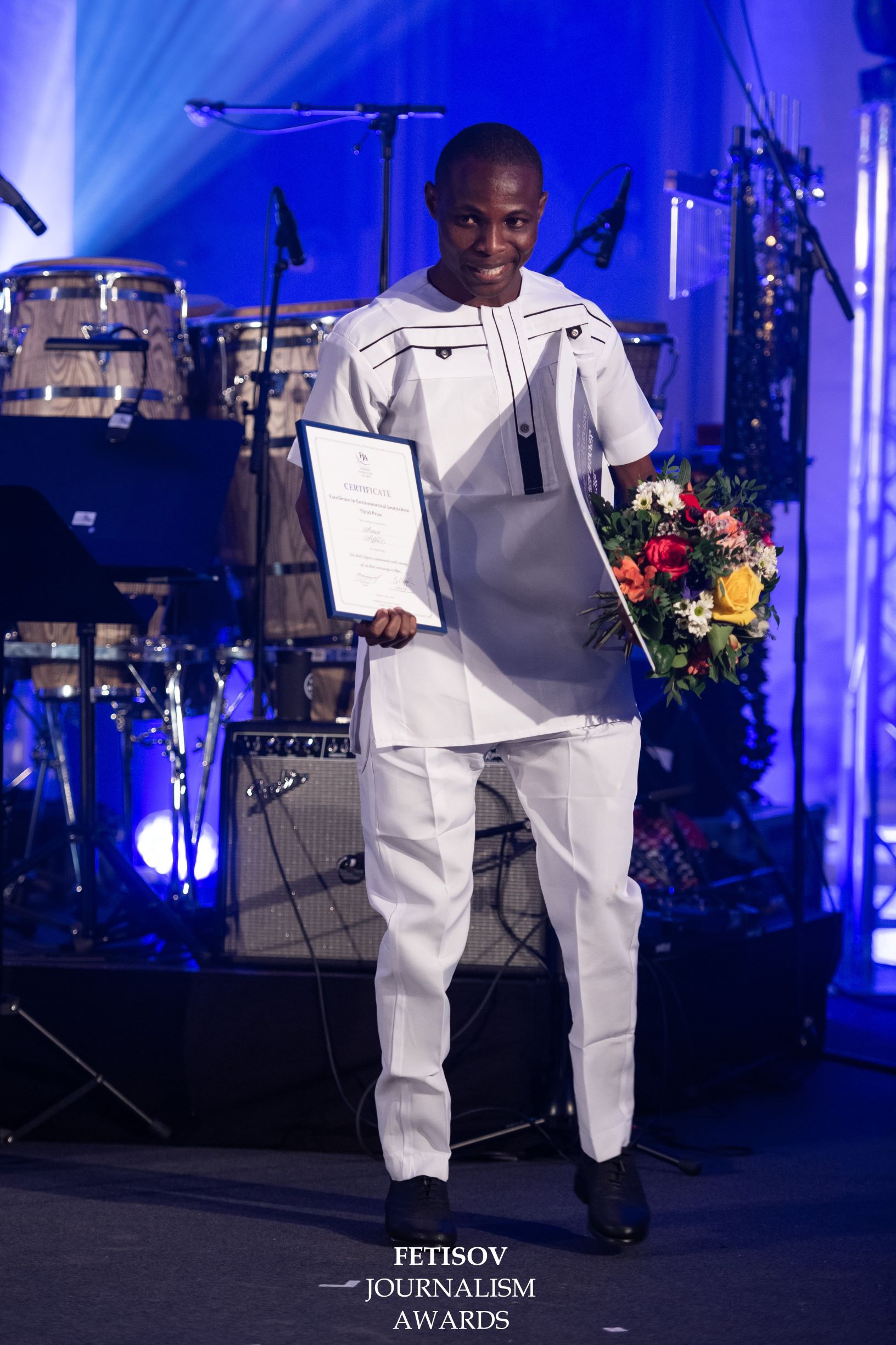 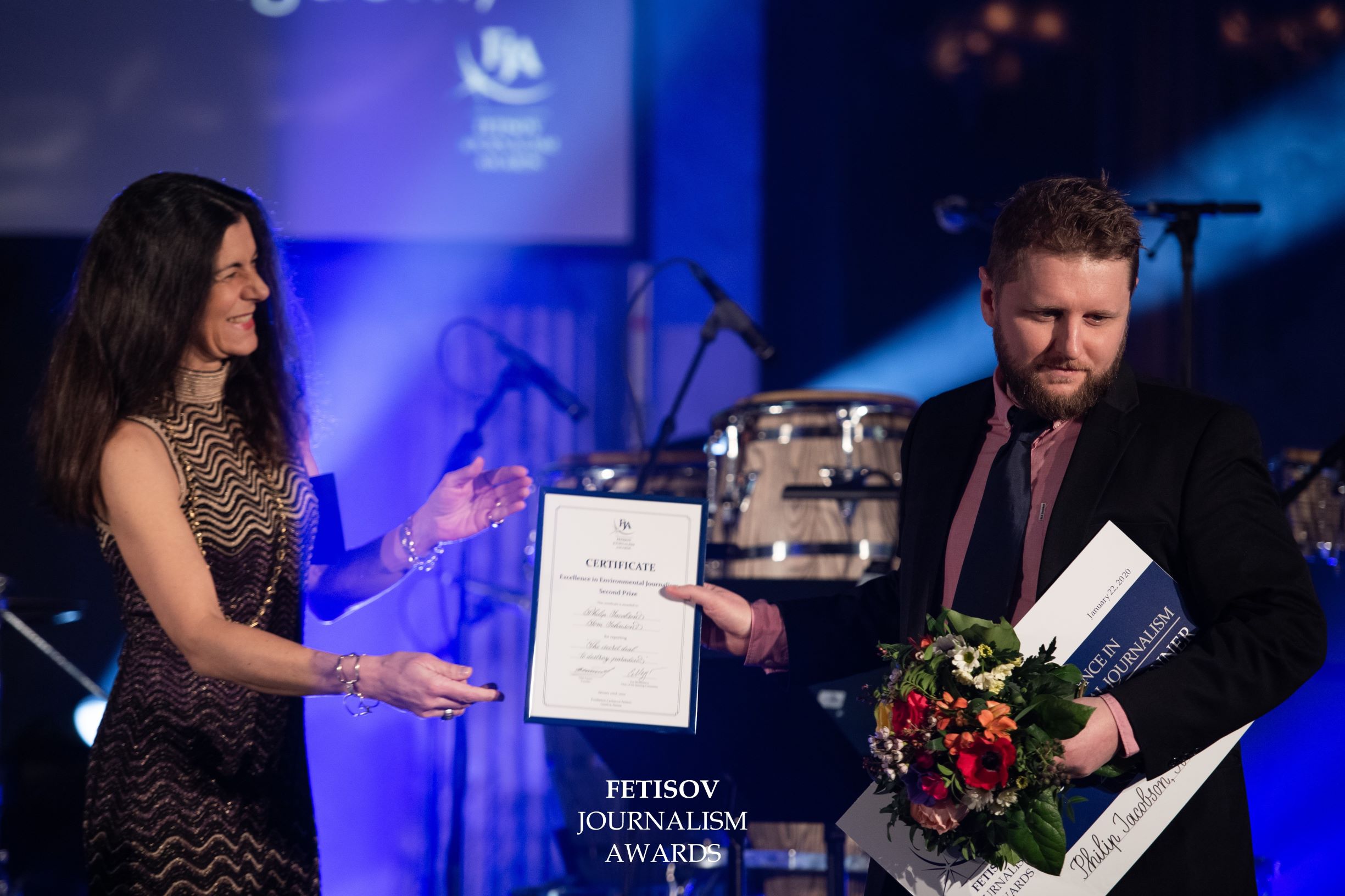 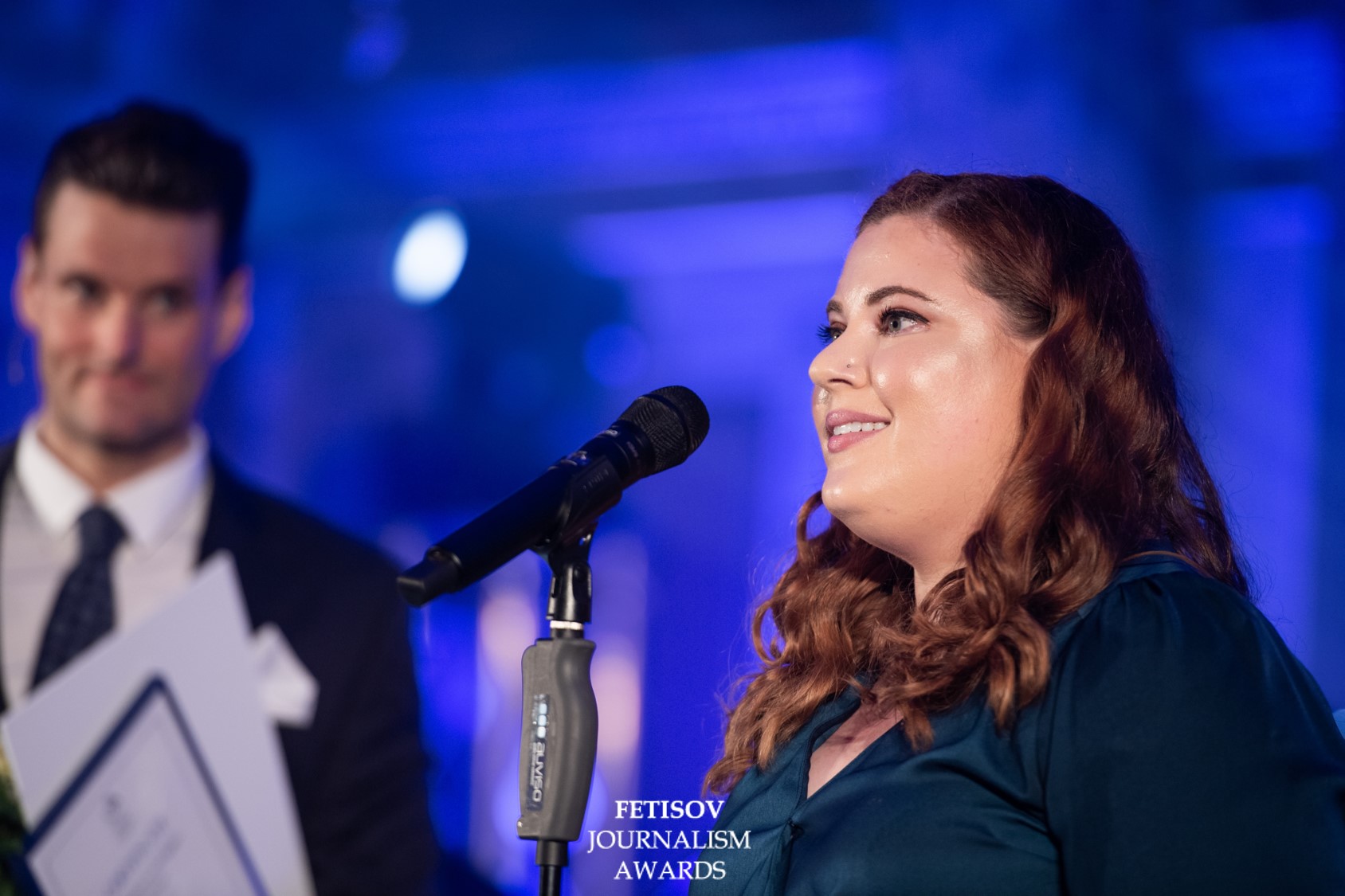 Katie May (Canada), third prize winner in the category “Contribution to Civil Rights” 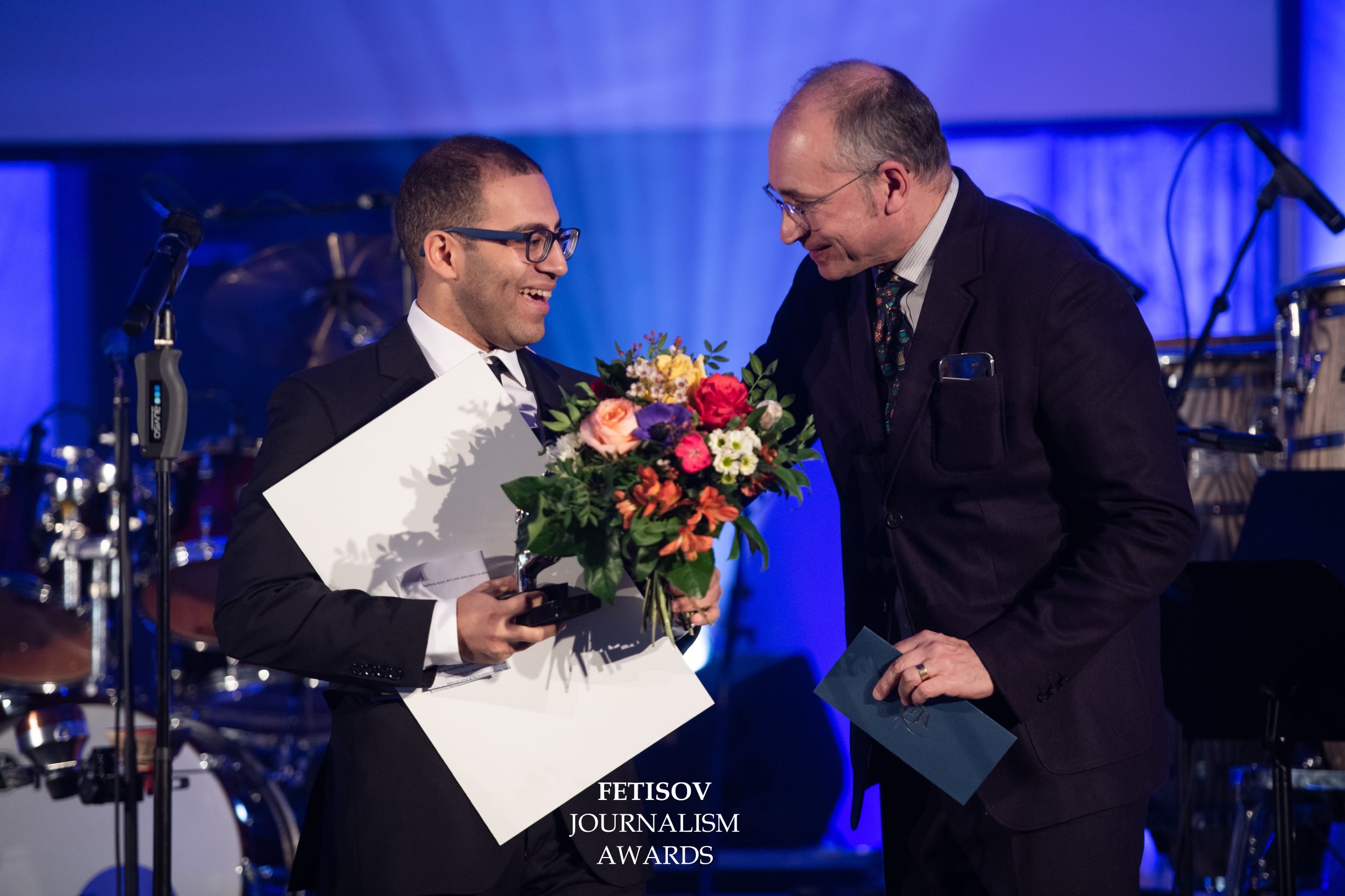 Ricardo Gutiérrez, General Secretary of the European Federation of Journalists

Gleb Fetisov and prize winners of the Fetisov Journalism Awards 2019